In the Korean cuisine different types of Korean noodles is a very popular item. The noodles were a well-known food of the Koreans from the ancient times. There were less productions of wheat so noodles were mainly prepared in auspicious occasions like wedding, birthdays, etc where this was considered as a special dish for that occasion. The traditional noodles in Korea are cold buck wheat noodles, noodles in hot & clear broth, cold noodle with mixed vegetables, noodles in cold soya bean broth, knife-cut noodles and other varieties as well. It is up to the cook what mix and match can be done with this Korean recipe.

There are different types of noodles that is been segregated as per its ingredients. Cellophane noodles are mostly made from sweet potato, dried corn flour noodles are known as Olchaengi guksu, noodles made from the mixture of rice flour, potato starch is called Gamja guksu. The dishes of noodles are also prepared in varieties. Banchan is a type which is stirred & fried with slender slices of beef as well as vegetables.

The Korean –Chinese noodle is also very much popular which is topped with fried black beans’ paste and many other ingredients. This origin also prepares a spicy soup with noodles.  Hot noodles in soup are one of the most delicious dishes in the Korean cuisine.

Janchi guksu is a soup with noodles which is wheat noodles prepared in beef broth and served with a sauce that is prepared with cucumber, red chili pepper, soy sauce and sesame oil. The garnishing contains thinly sliced fried eggs on its top. This dish is added in Korean recipe when there are occasions like wedding feast, 60th birthday parties or normal birthday parties in Korea.

The common cold noodle dishes are Bibim guksu which is served with a sauce that is very spicy along with half boiled egg, finely sliced cucumber, and in some cases chopped Kimchi is added as a garnish.

Nayengmueon is a dish that is generally prepared in winter and a popular dish from North Korea. This is generally buck-wheat noodles which are served either in cold soup or with a sauce. The noodles along with the other vegetables are mixed and stirred together by the cook and you get this mouth watering dish in most of the Korean restaurants in Singapore.

Chapchae is also one of the well-known dishes in Korea and tourists from the Western countries are the best customers for this dish. The noodles are mixed with soy sauce, sesame oil and garlic. The noodles are mostly prepared from sweet potato so you can try mixing and matching vegetables along with meat as per your choice. Broccoli, mushrooms, onions can also be added to make it tasty and colorful.

Another popular dish is Jajangmyun which is made of Chinese black beans and can be a take-out meal or home-made. You can avail this in almost all the Korean restaurants in Singapore. So if you are planning to try with all types of Korean noodles then you have to stay for at least a month in Singapore. 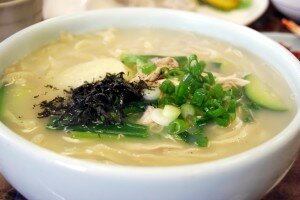 If you Love Korean Noodles, Share it with Your friends……